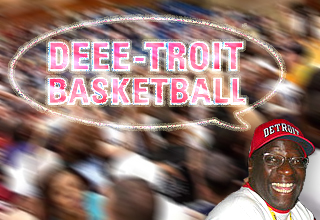 Here’s a voice-over recording session that you don’t see everyday, (if ever):

Greg saw the above line-up for a recent radio session with Minneapolis advertising agency, OLSON , and, as the saying goes, he was “hooked at hello”. This was either the makings of an old Monty Python sketch or a bad punch line from Studio 60.

Thankfully, it was neither of them. Here’s the deal…..

Scott Dahl, Associate Creative Director, showed up to pilot the conceptual ship that he and Creative Director Tom Fugleberg had concocted for their client, the NBA’s Detroit Pistons. The common thread running through these unique radio spots is Pistons P.A. man John Mason’s signature call of “DEEE-TROIT BASKETBALL.” According to Craig Turnbull, VP of brand management for Palace Sports & Entertainment, who was here at Babble-On Recording for the session, “If you’ve been to a Pistons game, watched one on TV, or even heard one on the radio, you’ve heard our P.A. guy, John Mason, start the sing-song, interactive cheer when an opponent turns the ball over. It used to be that he (Mason) had to say the entire cheer. But now all he has to say is, ‘DEEE’ and the fans finish it.”

Says Dahl, “It’s not often you’re handed such a wonderful mnemonic to work with. So we (OLSON) decided it would make great radio and TV to highlight many different interpretations of a call that’s gone mainstream in Michigan.”

Clearly, making great radio is as grueling n’ bloody as making sausage – (we had Scott fill all the casings)

So, once voice-over announcer Larry Homuth had finished up his copy via a ISDN Digital Patch patch from his secret lair in Fargo, we set to work recording our Minneapolis voice-over talent –

It’s a great concept that applies itself well to lots of scenarios (including the Pistons TV spots that are also part of the campaign), and Scott Dahl, at least, looks forward to the snowballing that he feels will likely occur as fans in Detroit get in on it. “Once in a while, you’re blessed with a concept that truly connects with the audience. This is one of those concepts. So my hope is that the campaign lives on and on. When you think about it, there are endless interpretations of the call. And I’m sure it’s only a matter of time before fans take it upon themselves to share their own particular version of it. Initially, we presented a fully integrated campaign that included a feature online that allowed fans to customize and submit their own rendition of the call. Although that hasn’t been fully realized yet, I think this year’s direction has the potential to go viral. In fact, I bet my coveted Swingline stapler that we’ll see a fan’s version of the call on YouTube soon.”

Of working on radio commercials in general, Dahl says “I love waking up on radio day. It means a good lunch, great company and best of all, instant gratification. With radio, you can hear your idea come to life in just a few short hours. TV, print, web, etc.—it often takes weeks to feel that rush. As for the success of the spots,… the campaign just launched, so we’ll just have to wait and see what the fans think. But what we’ve heard so far, at least anecdotally, is fantastic.”