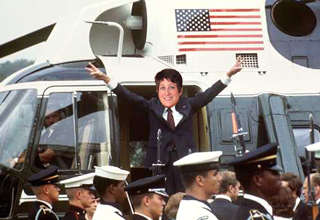 For the past few years we’ve had the pleasure of hanging around the recording studio with Michele Phillips – first as a voice-over talent, and then most recently as the broadcast producer for one of our very loyal clients, Marshall Fields.

But, as much as she has loved her gig here in the Minnie-Apple, she’s decided to move on and ply her wares in “The Big Onion” of Omaha, Nebraska. Yeah, we don’t get it either. Guess that theater, restaurants and culture just can’t hold a candle to missile silos and Cornhusker’s Football.

Michele, neatly coifed and ready to roll, lands in “The Big Onion”

All kidding aside, Michele is taking a big and important step with her career. She’ll now be the Senior Writer + Producer for Zaiss & Co, an Advertising and PR firm in Omaha.

During her stint here as a broadcast producer she helped us record, edit and mix literally hundreds of radio spots – including a few award winners. And, y’know, it just wasn’t a session with Michele without receiving a free and encyclopedic, education in movie trivia.

Without her eagle eye for movies some of us might never have seen, Kung-Fu Hustle, Garden State, or her most recent video recommendation, Crash – all of which were great suggestions for someone who rarely gets to the flicks.

Michele, on Jeopardy, is about to ace out the grand champion

Of course, my complete and total lack of movie knowledge has made for some truly great session fodder over the years. A typical conversation with Michele tended to go something like this:

Michele – “Oh, man, do you remember that scene in Pirates Of The Caribbean where Johnny Depp looks at the camera in the exact same way you just looked at your sandwich?”…

Michele – “you know, it’s like the one he developed in his early years – like when he was in Private Resort”

Michele – Is the voice-over cut to time?

The lucky folks in Omaha are truly fortunate to be getting such a good natured and talented person in their midst.

Best of luck to you Michele, and thanks for the laughs.