Babble-On gets Schooled by Brainco

In March, Babble-On hosted a radio class from Brainco, The Minneapolis School of Advertising. It was a chance for the students to learn about directing talent, keeping track of takes, when and why it’s smart to edit your script, and what it takes to get your spot the way you’d like.

The teacher, Brian Ritchie, a writer at Twin Cities advertising agency Colle+McVoy, created a contest where all of his students had to write a script that could potentially be produced during this “field trip” recording session. The lucky (or, perhaps “cursed”) winner of the contest would be announced at the session.

The evening started with über-voice talent and radio writer Mark Benninghofen sharing his insights on what a radio ad strong.

Here, Mark talked to the class before going into the voice-over booth to record the winning spot written by student Jim McCrary (that’s Jim in the center looking appropriately reverent – and scared)

Below are some shots of Mark Benninghofen doing what he does so well in the booth – being funny and charismatic. 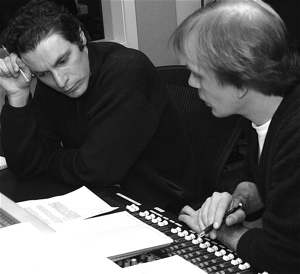 Once the recording was done, we discussed what were the best takes and what vocal styles seemed appropriate for the spot. From there it was a matter of editing, shaping, and mixing everything before our time was up – or the snacks ran out.

The spot, a mock-up for Tylenol, ideally would have been performed with multiple voices to offset the announcer read. However, even without having done that, the idea came through once we treated the background voices Mark had performed and added some music.

In the photo at left, Jim thoughtfully considers losing some copy. André, is thinking – hair plugs.

Below is the final mix of “Headache.” Of course, it is not a real ad for Tylenol and should not be considered an actual endorsement of their product, its effects, or its efficacy.

Great, now I have headache.

If you’d like to know more about Mark Benninghofen, click here for his Twin Cities agent, Wehmann Models and Talent

Send us your feedback.